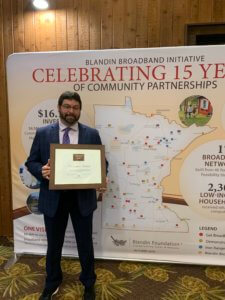 Everything from work to entertainment to civic participation is being shaped by the Internet. I tend to focus first and foremost on how broadband access can create educational opportunities. I’ll never forget what Jake Rieke told us about living without decent Internet access while we were working on the RS Fiber case study. His family is the fifth generation farming their land, but they were considering moving because they feared their children could be permanently disadvantaged attending school without adequate home Internet access. The work they put into RS Fiber will help hundreds of families in similar circumstances by ensuring kids are able to complete homework at home and facilitating virtual learning opportunities.

My family’s trajectory totally changed when my dad started at community college in his thirties, culminating in the first advanced degree anyone in his family had earned. I have lived the classic American dream: my parents seized key opportunities to dramatically improve our lives and we don’t begrudge living in a higher tax income bracket now. High quality Internet access can expand these opportunities to anyone in Minnesota, regardless of how close they live to a given school or college.

But this is just the tip of the iceberg when it comes to the benefits of great connectivity. I look forward to a time when simple mesh sensors can report on farm runoff, for instance. The fights in Saint Paul over this issue currently lack local data, resulting in policies that may disproportionately fall on more responsible growers in the efforts to ensure our streams and rivers remain healthy. Connectivity and creativity will offer new solutions to problems like this, allowing us to concentrate our disagreements where they should be: sports.

This is a hard question because so much of the work we do is in deliberately in the background. For 10 years, our team has focused on building an open foundation of knowledge that anyone can build on. My colleague Lisa Gonzalez has authored literally thousands of stories to date on how communities across the country are expanding access. I’ve spoken with local leaders, advocates, and engaged residents from hundreds of communities and given presentations in at least 30 states.

Our biggest victory is probably playing a key role in moving municipal broadband from a relatively unknown niche approach in the mid 2000’s to something President Obama traveled to Cedar Falls, Iowa, to give a speech on in 2015. The issue became important enough that Pew Research Center asked about community networks in a national poll and a strong majority of liberals, independents, and conservatives all agreed this issue should be decided locally without the state interfering to ban or discourage it.

What keeps us going is all of the local projects that have helped communities to thrive. RS Fiber and Ammon, Idaho, which have created entirely new models for next-generation Internet access. The tried-and-true models from telephone cooperatives in Minnesota, North Dakota, and South Dakota. The more than 100 electric cooperatives branching into fiber. Models for low-income access from municipal fiber in Wilson, North Carolina to San Francisco’s partnership with a local ISP named Monkeybrains. The local independent companies that have been investing in their towns for 100 years and hope to continue for 100 more. Each of these has inspired others – our role has been to elevate these successes as best we can.

This is another hard question because I see myself more as a utility player than a leader. At the Institute for Local Self-Reliance, we generally don’t think we are best positioned to tell communities what is best for them. Communities are too varied with different assets, cultures, and challenges. We try to rigorously document what has worked in different places and what hasn’t, in order to enable local leaders or activist groups to be successful in their goals. We support efforts that have organically developed rather than trying to impose our ideas on communities.

Over time, people looked to us for more guidance because we had done most of the research and public advocacy around municipal solutions. When people call you an expert, you start to feel like one, despite persistent nagging feelings of inadequacy. I have tried—unsuccessfully too many times—to be friendly to honest critics in both real life and on Twitter.

When I think about leadership, I tend to think about the need for humility in making sure you are working to understand criticism from others rather than just trying to win an argument or scoring points.

Broadband is a rare issue today that has strong nonpartisan agreement. Each week I talk to many people who have extremely passionate and divergent views across the spectrum of hot-button topics, but when we are focused on how to solve local problems, we put that aside. When working on this issue, I hope we are building bridges for working through other challenges that may separate us.

Broadband has become a top issue in many areas and it has immediate implications for health, jobs, education, and more. But the solutions we devise will be with us for decades. We have heard for more than 20 years that a magic solution was just around the corner—it’s not. Expanding Internet access in many Greater Minnesota communities is more of a 30 year problem than a 3 year one. Taking an easy solution today, especially committing to working with a partner that is not committed to the future of the community, is a risky proposition.

Cooperatives and municipal approaches have stood the test of time: we still have 2,000 cities providing their own electric service. Some of the independent companies will be good long-term partners and some may not— I suspect you may be able to tell the difference. Just don’t rush into something for the sake of getting it over with – your communities will live (or leave) with these decisions for many years.