For vision and perseverance to construct and operate Minnesota’s first municipal fiber-to-the-home network and its support of regional broadband via Southwest Minnesota Broadband Services. 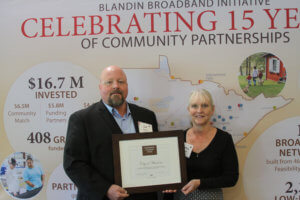 Broadband access is very similar to electrification of rural America. To participate fully in the economy, you need a connection. Business, education, and now medical services are all running on a broadband platform. Technology is pervasive and, as a small community, we need to be connected to be relevant.

I think the biggest victory to date would be the successful public referendum in 2002. It passed with approximately 68% of the votes. This happened because of local leaders who banded together and rallied the community after failed promises from existing providers.

In my tenure, our biggest victory has been related to economic development and the ability to improve quality of life. I’ll give you a few examples.

Local leadership has been infused in every step of this project. The city council and community committee led the early efforts on the referendum. Today, the city council and telecom commission help oversee and guide the system. Their decisions support what best for the system. A couple years ago, they passed a system upgrade. And what’s amazing is that the upgrade was needed because of increased use.

Multiplication of use of broadband in our community is amazing! Leadership has been on board with helping maintain and improve our system where we need to do that. They’ve also looked at how we can increase the use by doing things like wifi at arena and parks, security systems at parks and the pool, and support an intranet at the City of Windom.

Have perseverance and plan to be successful by doing your homework. It took our city several attempts to get a bond referendum passed, but we didn’t stop.

We went this route to fill a gap. In our area, broadband is not going to be a money maker. We don’t have the density. Yet the cost is still the same for the equipment. If you’re from a small town like Windom, do your due diligence and really look at the numbers. Be aware of what’s out there for cost and revenues.