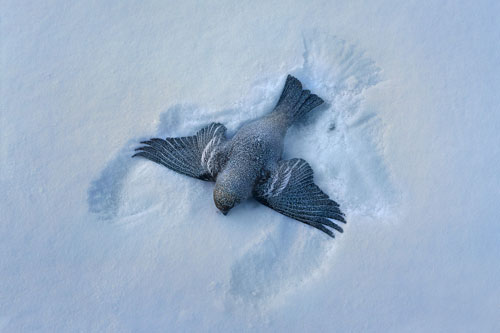 If there is one thing you need to know about effective community leadership, it’s this: creating a shared vision for the future, a vision arising from and embraced by the community, is the engine that powers change.

Sure, that sounds good on paper, but how do you go about creating a shared vision.

In one word — framing.

Before you can have a shared vision, you need shared meaning – an agreed upon way to describe and understand an issue. That’s where framing comes in.

As one of three core competencies of the Blandin Community Leadership Program (BCLP), we train leaders to look at, and talk about, issues in a way that resonates with people in their community.

For John Bauer, a 2014 BCLP alumnus from Grand Rapids, his framing work didn’t start at changing the way people were talking about mental illness and suicide — because most often, they weren’t. Instead, he began by crafting a way for people to start the conversation.

Enter What’s Left, a traveling exhibit with a goal of reducing the stigma surrounding suicide and mental illness and raising awareness about mental health recovery and suicide prevention.

In 2013, Bauer lost his daughter Megan to suicide. His experience in the aftermath of his family’s tragedy sparked the idea for an art exhibit as a way to encourage community conversation.

“I wanted to use another medium to get the word out,” said Bauer. “Everyone loves and appreciates art.”

His participation in BCLP “gave it energy because many people agreed it was a huge community health issue.”

Using leadership skills learned at BCLP, Bauer, alongside other BCLP leaders, framed the idea in a Kickstarter video, and ultimately raised over $50,000 in November 2014 to start the work. Since then, many funders — including Blandin Foundation, Grand Rapids Area Community Foundation, Miller-Dwan Foundation, Northland Foundation, and many private donors — have signed on.

The opening reception for What’s Left will be hosted at the MacRostie Art Center in Grand Rapids on Friday, September 4 from 4 – 8 pm.

From their press release:

Suicide and mental illness are major health problems that affect everyone. The topic is often viewed as taboo, and family members left behind can feel stigmatized and unable to talk openly about their experience and grief. What’s Left provides a space for participating artists and the broader community to reflect on the impact of suicide and mental illness and explore the use of artistic expression in the process of grieving, healing, and expressing hope.

“Whether on the phone or on the street, most people just didn’t know what to say to me,” said Bauer. “How could they if they haven’t been through something so horrific. To develop a vocabulary for talking about suicide, we have to be able to talk about mental illness as well. Not in whispers or disrespectful laughter. We need a culture shift where we all take responsibility for addressing the stigma associated with suicide and mental illness. That burden should not be on me and my family alone, nor should it fall to other families who have come before or after us.”

Over 45 of Minnesota’s finest artists working in painting, poetry, sculpture, graffiti, glass, fiber, photography, and more have contributed artwork to the project. Audience members of What’s Left will also have the chance to listen to an interactive audio installation of stories from survivors.