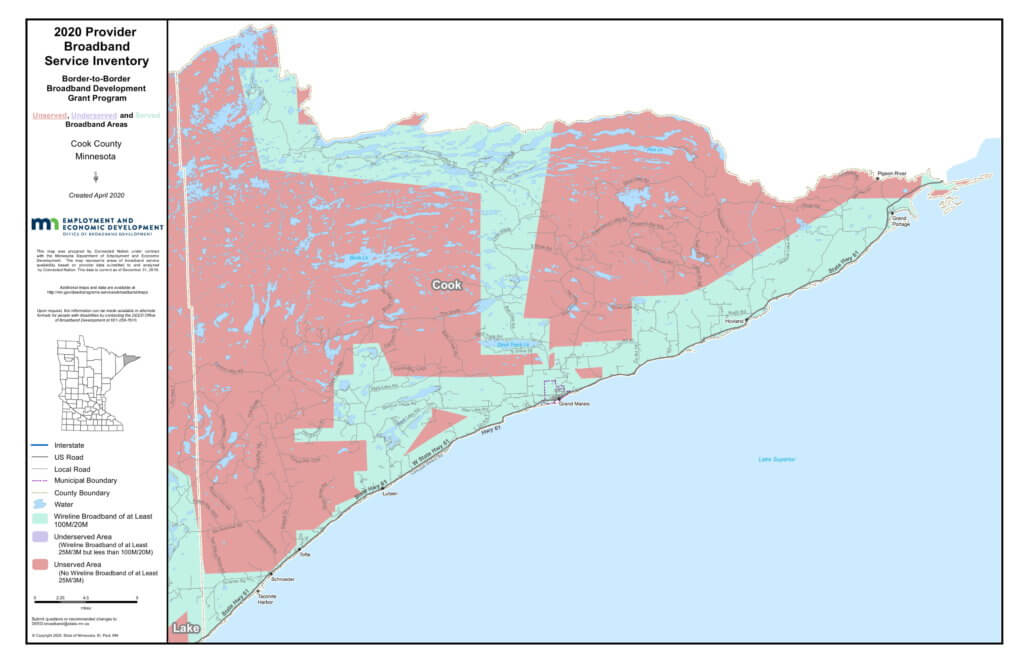 Cook County has had almost 95 percent broadband coverage at speeds of 100/20 Mbps since we started tracking progress. Despite being so close to the prize, they are dropping to a yellow status, because without renewed attention on broadband expansion, reaching the state goal won’t happen.

Cook County suffered for years because all telecommunications depended on a single fiber line. In 2008, dial-up was still the only choice for many residents. A grant from Blandin Foundation and a matching contribution from the County, along with additional support from Arrowhead Electric Coop, funded a feasibility study to examine the problem and potential solutions.

Based on the results of the feasibility study, the Cook County Board of Commissioners took up the idea of developing a fiber network. The Board passed an ordinance in 2009 declaring that a broadband network was in the best interests of the County and created the Fiber Optic Network Commission. Cook County formed a partnership with Arrowhead Electric Cooperative, which applied for and was awarded over $16 million in federal stimulus grants and low interest loans to build a fiber-to-the-home broadband network throughout Cook County.

Cook County was declared a Telecommuter Forward community, which indicates an interest in promoting broadband use as well as deployment. Cook County also has a passionate champion for online communication, Anne Braatas. She has been working with kids (grade 4-12) on online marketing and communications projects.