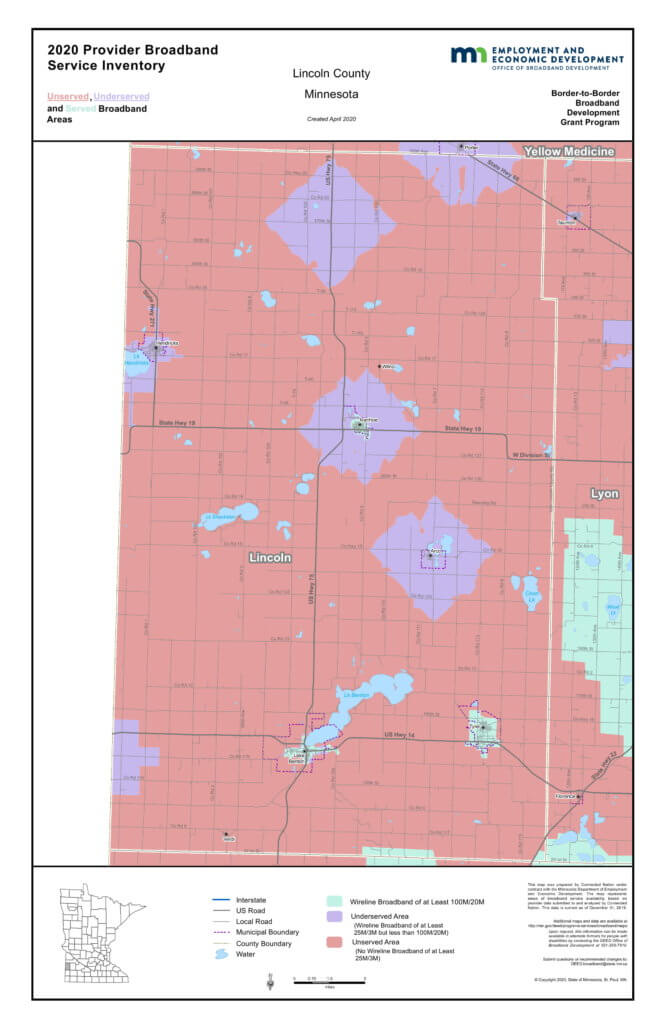 With help from the Blandin Foundation, Lincoln released a feasibility study in 2018. The report discusses next steps for the county, such as looking for a partner to bring broadband to those areas without it today.

Lincoln County was one of 23 communities named a Telecommuter Forward, which indicates an interest in promoting broadband use as well as adoption. But they have also been focused on adoption.

In 2016, Lincoln County started focusing on a county-wide plan with a feasibility study (with the support of the Blandin Foundation). There’s a great divide between western and eastern County and Hendricks and Lake Benton is in another boat entirely. We see this in several counties. County borders rarely match provider customer bases or other assets and barriers.

The feasibility study indicated Fiber to the Premise would cost $8.5 million in eastern Lincoln County. The community was able to go to the provider (ITC) with the budget and (maybe more importantly) maps. The plan included an overbuild of some Frontier areas but did not include Tyler and Ivanhoe. ITC said they were able to $2.5 million and looked at CAF reverse auction. That left the community with $6 million to meet the need. They applied for a Minnesota state grant; they found a way to include Tyler and Ivanhoe, which brought the project to $10 million. Unfortunately, they did not get the funding.

The county decided to move ahead on their own. They are trying to bond for $5 million. The area is fortunate that they have seen expansion in wind industry, which has led to production tax, which could be used for a special project such as broadband.