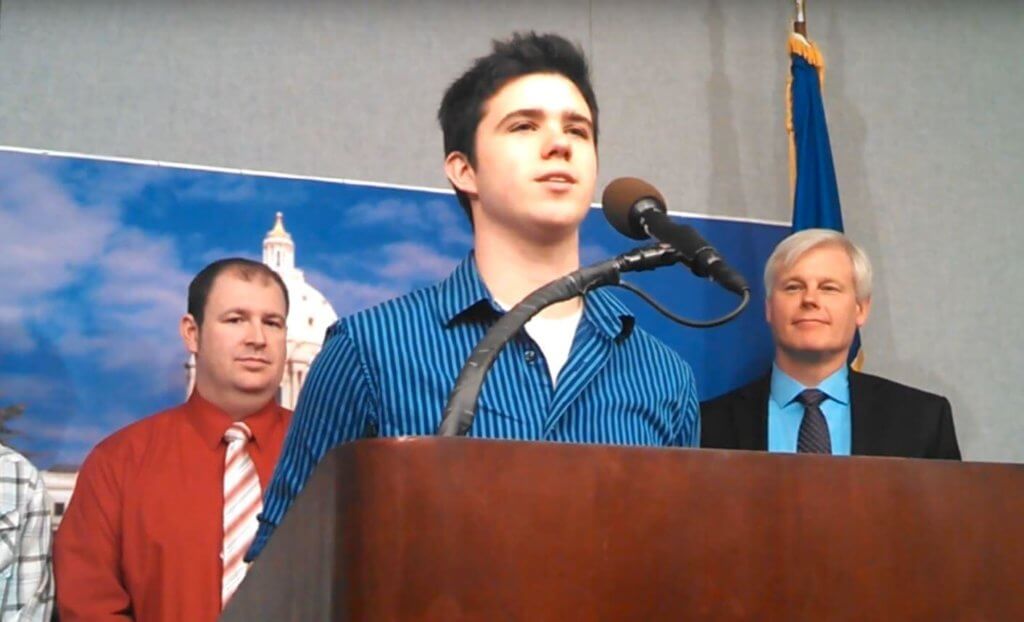 What if you had to drive an hour to turn in a homework assignment. Would you make the trip?

Maybe, maybe not. It’s a lose-lose situation really. You either miss out on time to do other things, like other homework or extra-curricular activities, or you risk getting a zero on an assignment. Imagine having make this choice multiple times per week!

This dilemma was recounted by Mora High School student Michael Greenberg at at a Minnesota House press conference earlier this week. The topic: broadband infrastructure fund. The message: it’s needed in rural Minnesota.

Mora, a Blandin Broadband Community, has committed time and attention to garnering community wide support to implement projects that help the community use broadband to its fullest extent.

One such project provided each student, grades 5-12, with an iPad so they could access resources to enrich their education. However, if the infrastructure isn’t available to use the iPads, it’s like giving a 16 year old a shiny new car but telling them there’s no where they can drive. How deflating!  This is what’s happening in Mora, said high school assistant principal Nick Bakke.

The infrastructure is not there for all students to be on a level playing field.

This isn’t acceptable, said Rep. Paul Marquart (Education Finance committee), who expressed how integral broadband connectivity is to the health of our education system.

We need to have great access to broadband if we’re going to have the World’s Best Workforce…as a state, we cannot afford to have one student fall behind.

The tie between broadband and education may not be apparent to all rural Minnesotans, but Rep. Paul Thissen, said during his state tours, two needs always rose to the top: an educated workforce and broadband infrastructure.

It is an issue of competitiveness…It’s about making sure that no part of the state is left behind as we move toward a 21st economy…It’s also about leveling the playing field for our students. There isn’t any question that access to a high-speed broadband Internet is access to a world class education for our Minnesota students.

One community who has fully embraced broadband as an economic driver is Red Wing, MN. As the smallest community to receive national attention for their technology investments and innovations, Red Wing Ignite supports entrepreneurs, developers, and small businesses as they harness the power of their gigabit network to launch businesses and products into the world.

While some legislators are saying the $25 million the House has allocated for the broadband infrastructure fund is too small of a drop in the bucket to bother, Thissen says this “down payment” towards achieving our goal of border-to-border coverage is a step in the right direction.