Economic optimism is fluctuating; better for some, not for others. 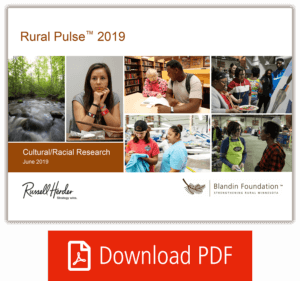 About half say that living-wage job opportunities in their community are inadequate, a slight increase from 2016 study findings.

Six in 10 feel their community has an adequate workforce available for local businesses.

While 31 percent saw in increase in their household income over the past year, 15 percent say they experienced a decrease.

Fourteen percent experienced a job loss in the past year, a six percentage point decline from 2016 study findings.

Three-quarters are optimistic about the future of their community.

Eighty-three percent feel confident about their ability to personally make an impact in their community, an increase from 2016 findings.

Confidence in community ability to address local issues has improved across the cultural landscape. Three in four (74%) agree those in their community are able to work effectively across differences — such as ethnicity, sexual orientation, religion and nationality — to face local challenges.

There are strengths, and communities have substantial progress to make in many areas.

There are significant gaps when comparing the importance of an issue to how communities are performing. Areas in which communities are decidedly underperforming include addressing opioid and drug abuse, addressing mental health issues, affordable housing, economic development, healthcare, job opportunities and availability of childcare.

Even more so than before, cultural/racial residents don’t feel that they are being heard.

Two in five feel metropolitan needs are more important to elected officials than those of rural communities, a continued increase in dissatisfaction from previous studies.

There is room for communities to be stronger.

Two-thirds have close friends of a different race or culture.

Two in five feel people who experience the most discrimination, bias or harassment within their local area are those with a drug or mental health issue.

Sixty-eight percent are confident that members of their community are able to stand up to discrimination and hatred, should they see it occur. One in four disagree.

Moving to urban areas is still a consideration.

Down from 2016, 16 percent of those studied do not expect to live in their current community five years from now; another 12 percent are unsure.

One in four have considered moving to a metro area within the past two years, primarily for job opportunities.

Just over half (52%) have served in a leadership role within their rural community, 16 percentage points higher than in 2016.

Of the cultural/racial residents in rural Minnesota who have not yet served in a leadership role, more than six in 10 (62%) would at least consider doing so if asked.